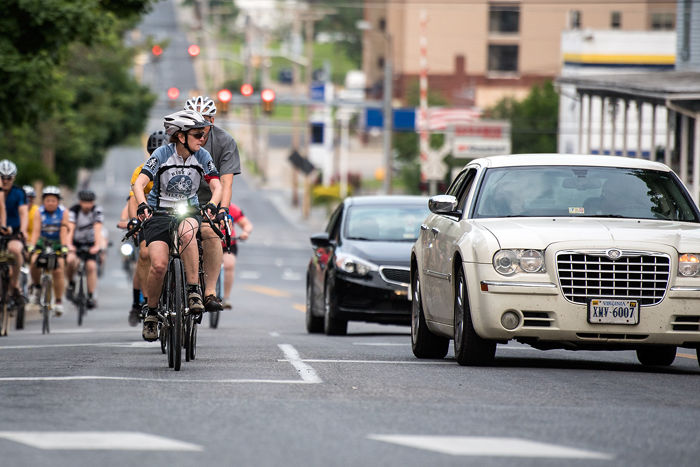 One of the Shenandoah Valley Bicycle Coalition’s longest-serving volunteers, Marcia Lamphier, has filled many different roles over several decades including Ride Leader and Treasurer. She is not only a Lifetime Member of the Bicycle Coalition but also has been a long-time member of the planning committees for enduring SVBC events like the annual Fall Century and the Shenandoah Mountain Bike Festival. She even met her life partner while volunteering with SVBC.

Shenandoah Valley Bicycle Coalition (SVBC): When and how did you get involved with the Coalition?

Marcia Lamphier: I started riding with the club in 1987 or 1988. At the time, “SVBC” was the Shenandoah Valley Bike Club, and it was for road riding. I had bought a road bike from Cool Breeze, a bike shop that was downtown and had a women’s ride, which I joined in on, and that’s how I initially made the connection.

After I went to a bike club meeting, I learned that there were volunteer opportunities. Everything the club did required volunteers, so I got involved. It was fun – my friends were in the club, and it was a way to meet good people. I remember that one of the first ways that I got involved was riding the 50-mile option of the SVBC Century.

SVBC: Road biking was just the beginning for you. What other kinds of riding do you do now?

ML: It didn’t take me long to also start mountain biking because many of the women with whom I was riding socially on the road also mountain biked. After that, I got into commuting, which I absolutely love. Now, I also have a gravel road bike, and I love that, too, because the gravel roads are more fun on a gravel bike and have less traffic. For riding in snow, I have a fat bike, and we also have a tandem.

SVBC: Speaking of tandems, we hear that you met your tandem and life partner, Marshall Hammond, while volunteering for SVBC. Tell us more.

ML: Yes, we met through riding on one of the club’s social rides that I helped lead, but I don’t remember exactly which ride. Officially, we’ve been together for 20 years, but we met longer ago than that. He would come to a lot of our club’s Wednesday and weekend rides before we were together, so yes, you could say I met my life partner through volunteering. Now, we volunteer together a lot.

SVBC: You obviously love riding and sharing rides with others. Tell us about some of the rides you lead.

ML: My signature rides are the Wednesday Social Rides and the Icicle Ride. 2020 will be the 28th year for the Wednesday Social Rides. When the Wednesday rides started, they were just a women’s road ride that I led from where I worked at a bank downtown. But after a few years, there weren’t that many women committed to doing it, so I opened up the ride to everyone. Over the years, the ride has grown. Now it starts from the Harrisonburg City High School, where I work as a Registrar. The Wednesday ride is a consistent, calm ride – great for someone getting into cycling because we don’t race, we don’t go fast, and we don’t drop people. People are often referred to the ride by the local shops after buying a bike. It’s a great way for new riders to meet other riders and learn some of the best roads to ride in the area. We also get long-time, local regulars and visitors from out of town who are staying at Massanutten. On a typical Wednesday night during Daylight Savings Time from March to October, we ride 15-20 miles in about two hours.

New Year’s Day 2020 marked the 25th edition of the Icicle Ride, which leaves out of Bridgewater at noon. When Bill Taylor first started it, it went out of Hillandale Park, but when he moved to Bridgewater, we also moved the ride start there. We still start in Bridgewater although he’s no longer involved in leading the ride. It’s a great way to kick off the New Year because for at least one day of the year, everyone there can say, “I’ve ridden every day of the year so far!” How many people we get each year depends on the weather, but we typically ride for 1.5 hours. Some riders turn around sooner, but no matter how far you go, it’s a great way to catch up with everyone over the winter, especially the people with whom I ride on Wednesday evenings all spring, summer and fall, but whom I don’t otherwise see much in the winter.

SVBC: Leading rides isn’t the only thing you do for SVBC. What other roles do you fill?

ML: I’m on the Coalition Century Organizing Committee, and I do whatever needs to be done to keep that running. Our meetings are not a burden; they are more like a social activity because our core group has been doing it for so long, and it runs so smoothly. I can’t imagine not helping with the Century, and it’s been going for 38 years, so  2020 will be 38 years. We made a big change last year and started it from Oakdale Park in Bridgewater instead of Hillandale Park in Harrisonburg, and it worked out great because there are more parking and pavilions, and now we don’t have to start with that really steep climb immediately upon turning from the park onto Dogwood Drive.

I’ve also done a lot of trailwork over the years at places like Narrowback, Massanutten’s Western Slope and Hillandale, and to this day, I like working on the trails that I’m going to ride. It’s a neat feeling to ride somewhere and know that you helped make it that way. We always take a hand saw with us whenever we ride and are prepared to help clear the trails as needed.

Trash Pickup is another thing I’ve helped coordinate and do. Initially, the club participated in the Adopt-a-Highway Program, and we picked up trash along the Dry River and Amberly Roads, but we’ve since switched to picking up trash on Tilghman Road, which the Forest Service loves. We get a lot of help on Tilghman from many SVBC volunteers and their families, and it’s good for others in the community to see us cyclists out there picking up trash and giving back.

Additionally, I’m a long term member of the Shenandoah Mountain Bike Festival Planning Committee, and I used to be part of the club committee organizing the Shenandoah Valley Bike Festival, which no longer exists. Originally starting in 1992, the Chamber of Commerce first ran the Shenandoah Valley Bike Festival, then SVBC took over, and finally, Our Community Place had it until 2015. It was a great road century held every July on roads mostly north of Harrisonburg, but we all struggled to get enough volunteers to run it. For the still happening Shenandoah Mountain Bike Festival, I’ve done a lot of things over the years, but one of my favorite parts is helping co-organize, along with Kari Carpenter, the Ladies’ Wine & Cheese party that happens as part of the festival every year.

SVBC: Why do you volunteer with SVBC?

ML: I love to be around bike people who enjoy the same things that I enjoy. They are my community. So many people that I call my friends I know because of cycling. If it hadn’t been for cycling, I never would have met them. And yes, we all have our own other lives outside of cycling, but cycling is the thread that connects us all together.

SVBC: Any advice for SVBC members looking to get involved and volunteer?

ML: Anyone can be a volunteer. You don’t have to have specific skills because everyone can do something. For example, you can come to Trash Pick Up day and help pick up trash or come to trail work and simply pick up sticks to keep the trails clear. It’s ok to show up for just an hour – you don’t have to have a lot of time. Any amount of time makes a difference, and there’s no minimal commitment in terms of hours or days.

SVBC: You’ve been involved with the Coalition for a long time. What are the most significant changes you’ve seen over the years?

ML: First was the merger of our two local clubs: the Shenandoah Valley Bike Club and the Shenandoah Mountain Bike Club in 2008. That was a big success because now we don’t have two different clubs both doing everything twice administratively. Second was getting an Executive Director. Kyle Lawrence has done a wonderful job and handles a ton of important meetings for the Coalition with key people in the City of Harrisonburg while others also help with Rockingham County. Third has been the amazing growth of our membership numbers. We also now have a presence with some board and other members in the City of Staunton and Augusta County.

SVBC: As someone who’s been involved behind the scenes with SVBC, is there anything you’d like people to know about the Coalition and how it works?

ML: The best thing about SVBC is our community. It’s all about being part of our cycling community. It’s not about racing, although some people do race. We’re about riding and advocacy, too. For example, if you commute, we’re there for you with our advocacy work.

SVBC: So what do you do for fun when you’re not working or volunteering?

ML: I ride my bike every day for a minimum of one hour. It’s always outside – no indoor riding! I’m so fortunate to live where I live, and my work hours are super convenient to help make my riding happen. I also like to read a lot and socialize.