Ever sold your used gear for more than it cost brand-new? RMH anesthesiologist and cyclist Bob Li did, after stumbling into one of the Valley’s hidden sources of wealth.

Seems Bob was chatting to the guy who runs the heart-lung machine during heart-bypass surgery, and mentioned he wanted to sell his old bike stuff but didn’t know how to get the best price. The heart-lung guy told him to turn the case over to the professionals: Pro Tested Gear, a sporting goods consignment team. Bob had seen that name on eBay, but had no idea the company was right here in downtown Harrisonburg — and he’d even met two of them. When he rang Nick and Phoebe, they said they’d be happy to collect equipment from Bob’s house and use their expert system to market it on eBay. They kept Bob updated with links so he could follow his items as each was listed and sold, and then sent him a fat cheque.

Bob also talked a lot about how Pro Tested Gear are really pleasant, “wonderful people who represent everything good about the bike community”, and really care about everyone enjoying themselves instead of just elite athleticism, even though they themselves totally have the elite athletic cred points and that’s how they know how to sell your stuff so well, but I wasn’t listening because LET’S GET TO THE MONEY PART.

So Bob was getting rid of a bike trainer — an apparatus that lets you use your real bike as a stationary exercise bike. You might think this would be a white elephant on the market, especially in April when the weather’s warming up. But no — Pro Tested Gear made it fetch a nearly-new price, even MORE than the slightly-on-sale price Bob had paid in the first place. They got nearly-new prices for his wheels, too, despite plenty of use. Bob even sold his old bike three weeks ago — and guess what he did with all that cash? 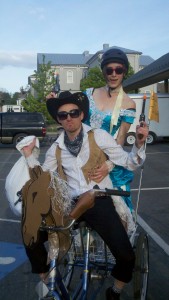 That’s right. He spent it at a local independent bike store (our lovely Titanium Sponsor Shenandoah Bicycle Company), on a new bike and a new set of wheels.

Phoebe says Pro Tested Gear want to be in symbiosis with other local businesses, and they’re doing a great job. They’re also making enough cash to sponsor Bike Month at the Titanium level — and thanks to our dealings, we can confirm Bob’s account of Pro Tested Gear as copacetic, charming, laid-back yet on-the-ball folks.

Oh, and remember the Bike Parade riders in magnificent Stagecoach Robbers costume, complete with capguns and adult tricycle horse? Yeah, that was Pro Tested Gear. But don’t fret, H’burg: the cash they boldly procure from the internet circulates back to your local pockets.

This post was a tag team effort by Anne Lorimer and Suzi Carter. Anne wrote the piece and is queen ringleader for Bike Month-Bike to Work Day, an SVBC member, and an anthropologist to boot. Suzi posted it and is coordinator for Bike Month, an SVBC Board Member and the Program Director for the Northend Greenway. More info at hburgbike2work.org and northendgreenway.org.