Kyle October 27, 2012 Grab One More Gear Playing Outside in the Shenandoah Valley 2

After a highly successful first attempt at an overnighter (other than missing the place we were planning to camp and having to ride back over Shenandoah Mountain at dusk) the previous weekend, Johnnnny Youngdahl and I decided to head out again on 10/21 for another quick overnight.  This time we decided to head north of Rt. 33 and head up Long Run Road to camp on Rader Mountain.  Here’s the whole loop I took from Bridgewater:

So I met Johnny at the base of Long Run Road at 1pm on Saturday and we started the climb up.  The nice thing about this climb is it never really gets that steep (I think the average grade is around 6% for the first six miles where it’s a steady climb) and even with the loaded bikes we made pretty good time getting up the road.  It didn’t hurt that the scenery was stunning (the pictures in this post are a combination of ones I took and ones Johnny took). 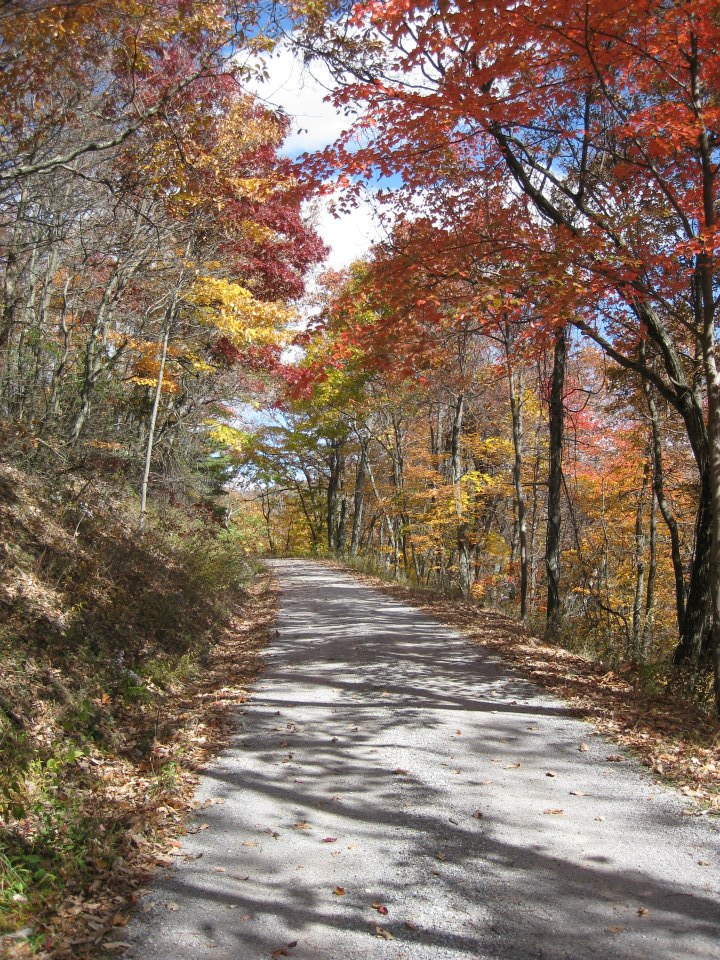 After the first six or so mile the road gets a little rougher and the climbs, even though they are short, get steeper.  On a couple I was in my granniest of granny gears but still made it up no problem.  At this point we were riding the ridge and views off each side of the road were incredible.  We stopped at a couple different places to take some pictures. 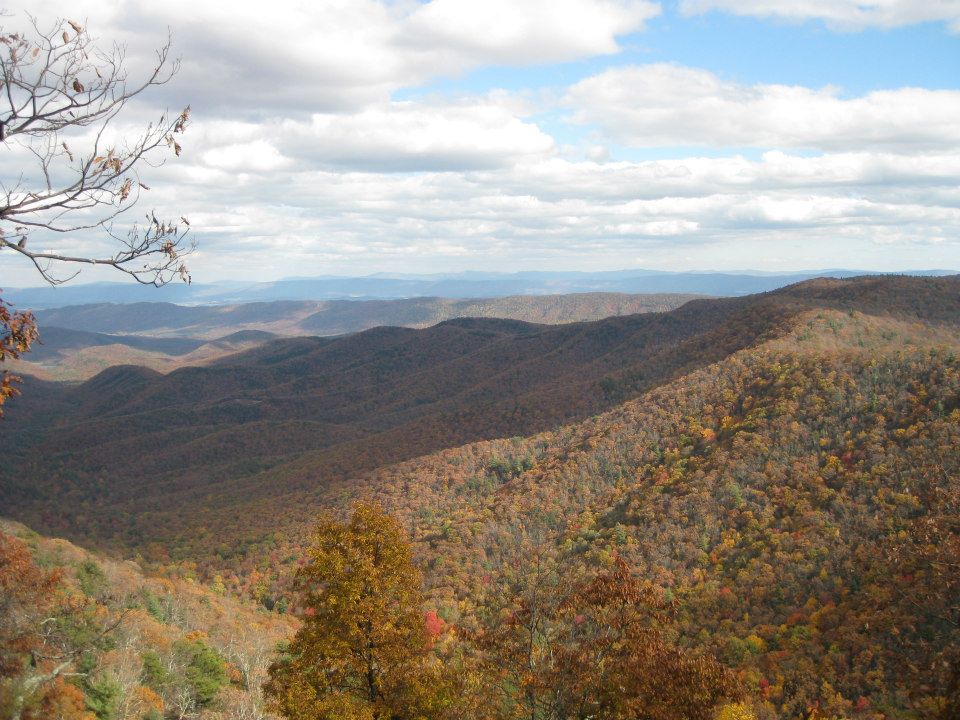 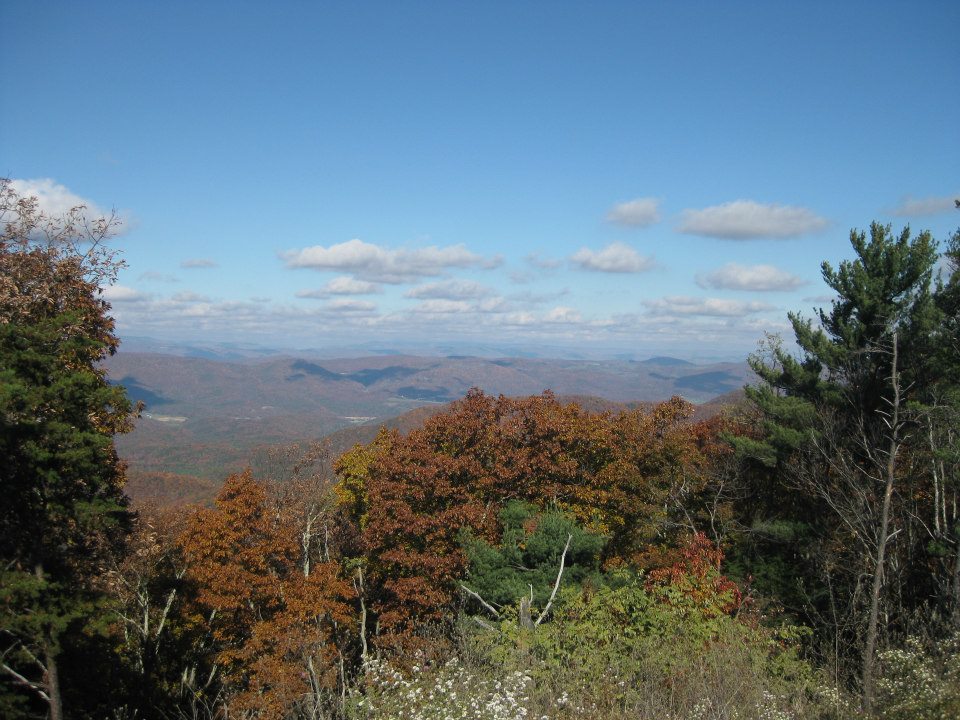 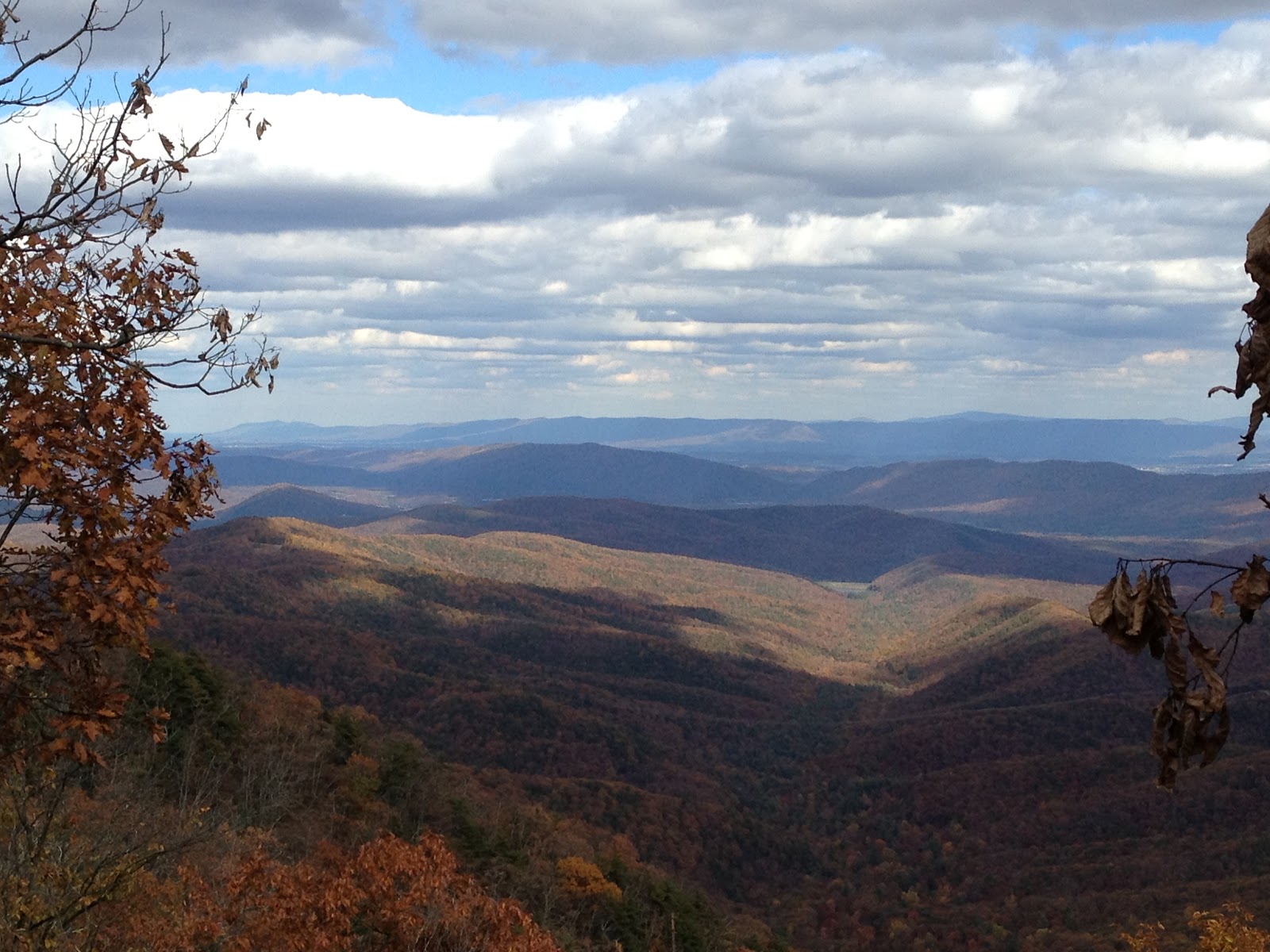 After a few more mile of riding we got to the intersection with Hall Springs Road.  Before heading to our final destination for the day we had to make a quick detour to run down to Sand Spring to replenish our water supply.  Johnny had only been to the spring once years ago and I had only had its location roughly pointed out to me as we flew down the forest road on another trip so it took us a few minutes to  figure out where exactly it was located.  After a short hike down a trail we found the spring. 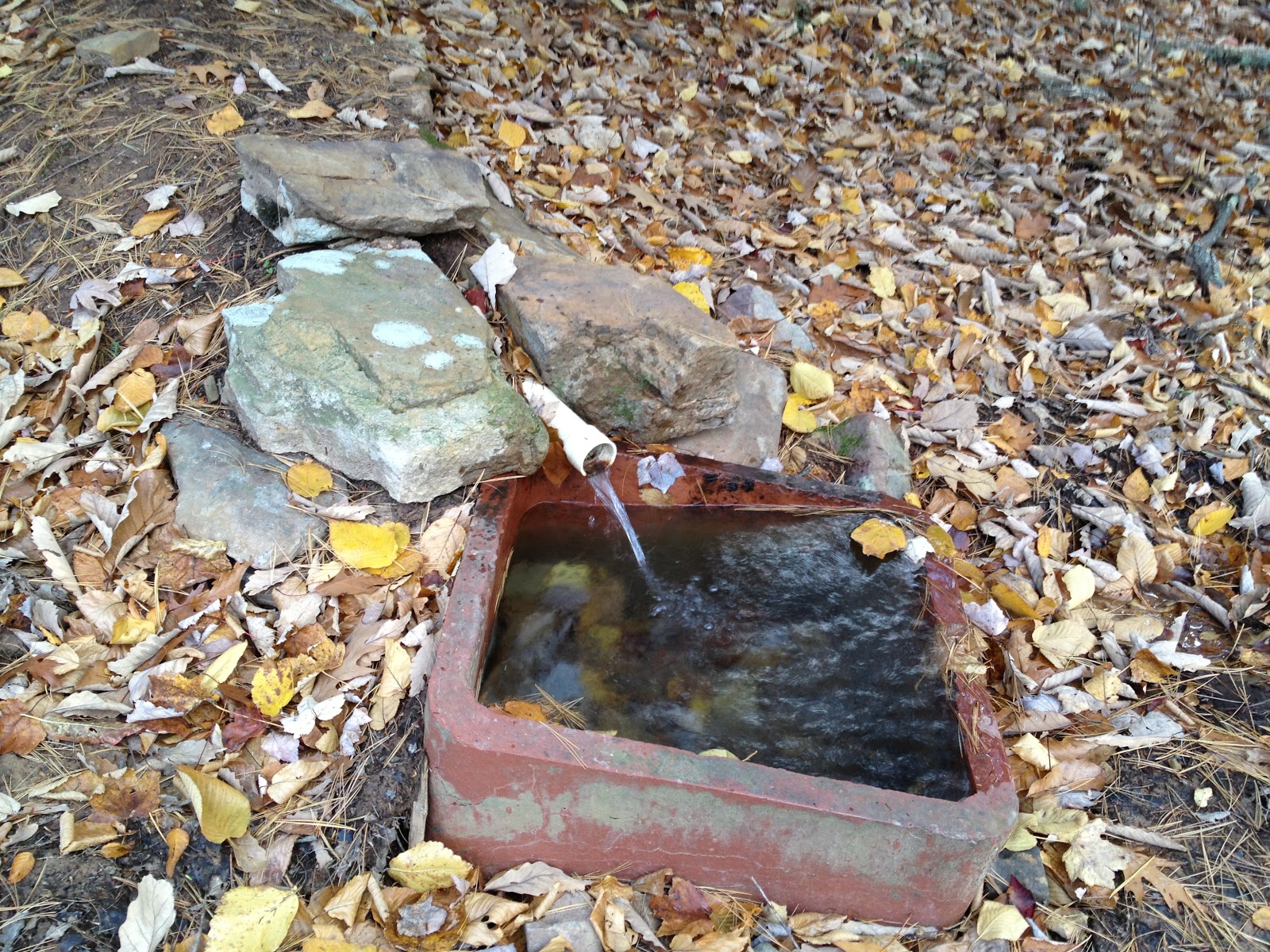 Even though it was probably perfectly clean coming out of that pipe, water quality is one of those things I just know too much about so I got the water filter out and filled up the water bottles.  There is a cool marker at the spring…who knew? 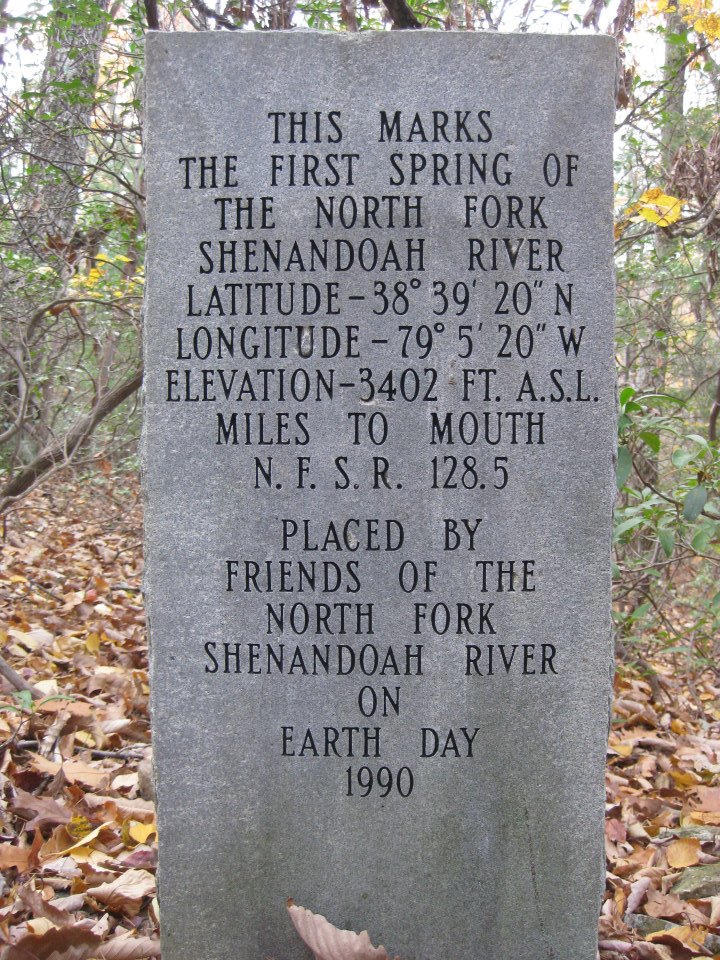 Now with full water bottles we had a short climb back up to Hall Spring Road and then just another mile or so until we hung a left and headed out on Rader Mountain.  Before we had left Johnny had scoped out potential camping spots along the ridge but we ended up riding all the way down and picking the second field from the end.  We found a spot along the side where Johnny could string his hammock and got camp set up.  Other than the number of piles of bear crap that littered the field being a bit disconcerting (nothing fresh though) it was a great spot. 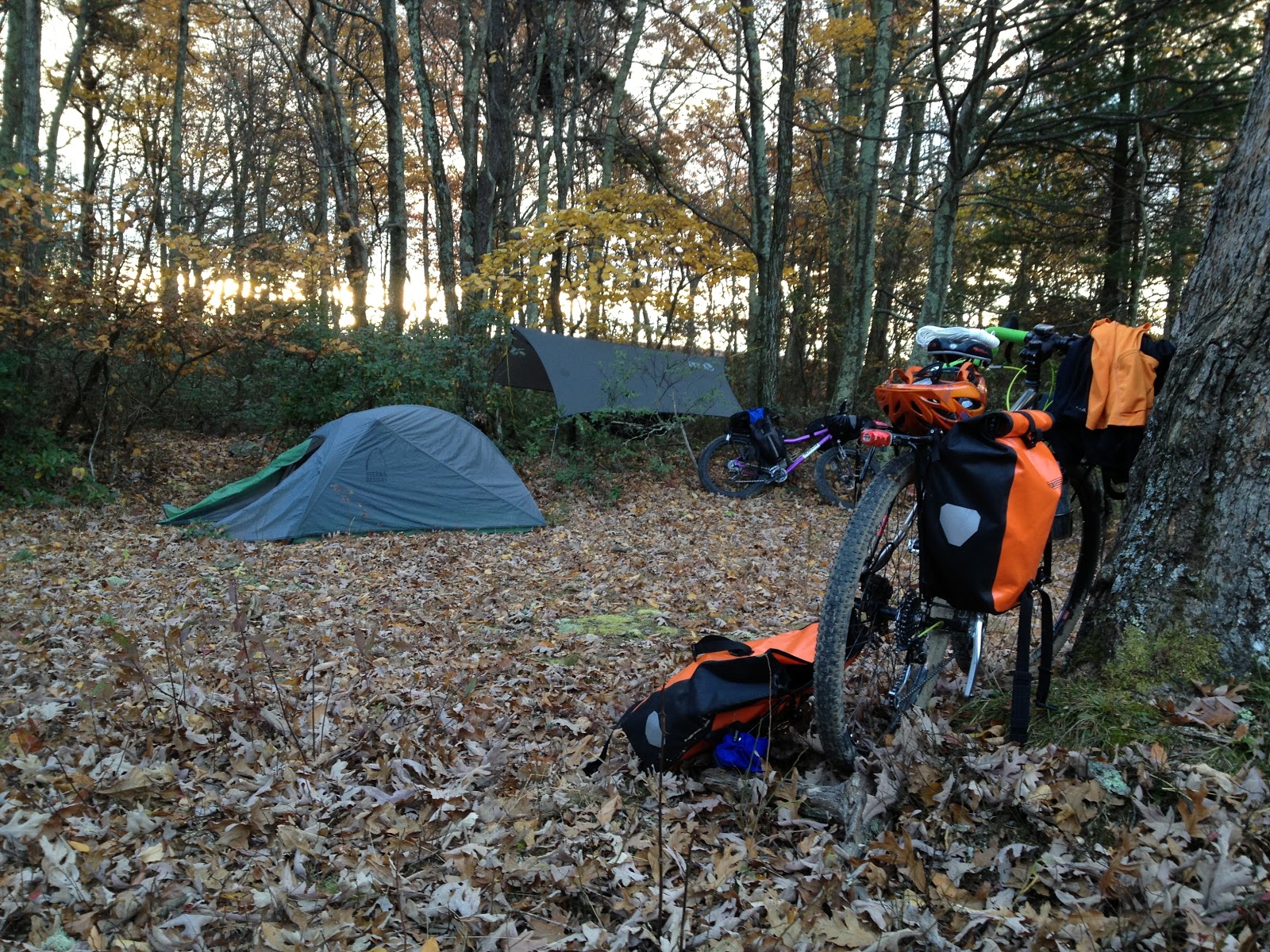 One of the reasons for this trip was to get up on a ridge where we would have a clear view of the sky for the Orionid meteor shower.  When the sun went down we had am incredibly clear sky but the quarter moon was drowning out all but the brightest starts.  I got up a couple times during the night hopeful to be able to sit out in the middle of the field and watch but fog/clouds rolled in completely obscuring the sky.  I got up for good around seven and sat in the middle of the field in my sleeping bag watching the sun come up and eating a couple granola bars.  Once Johnny got up he had to have is morning ramen. 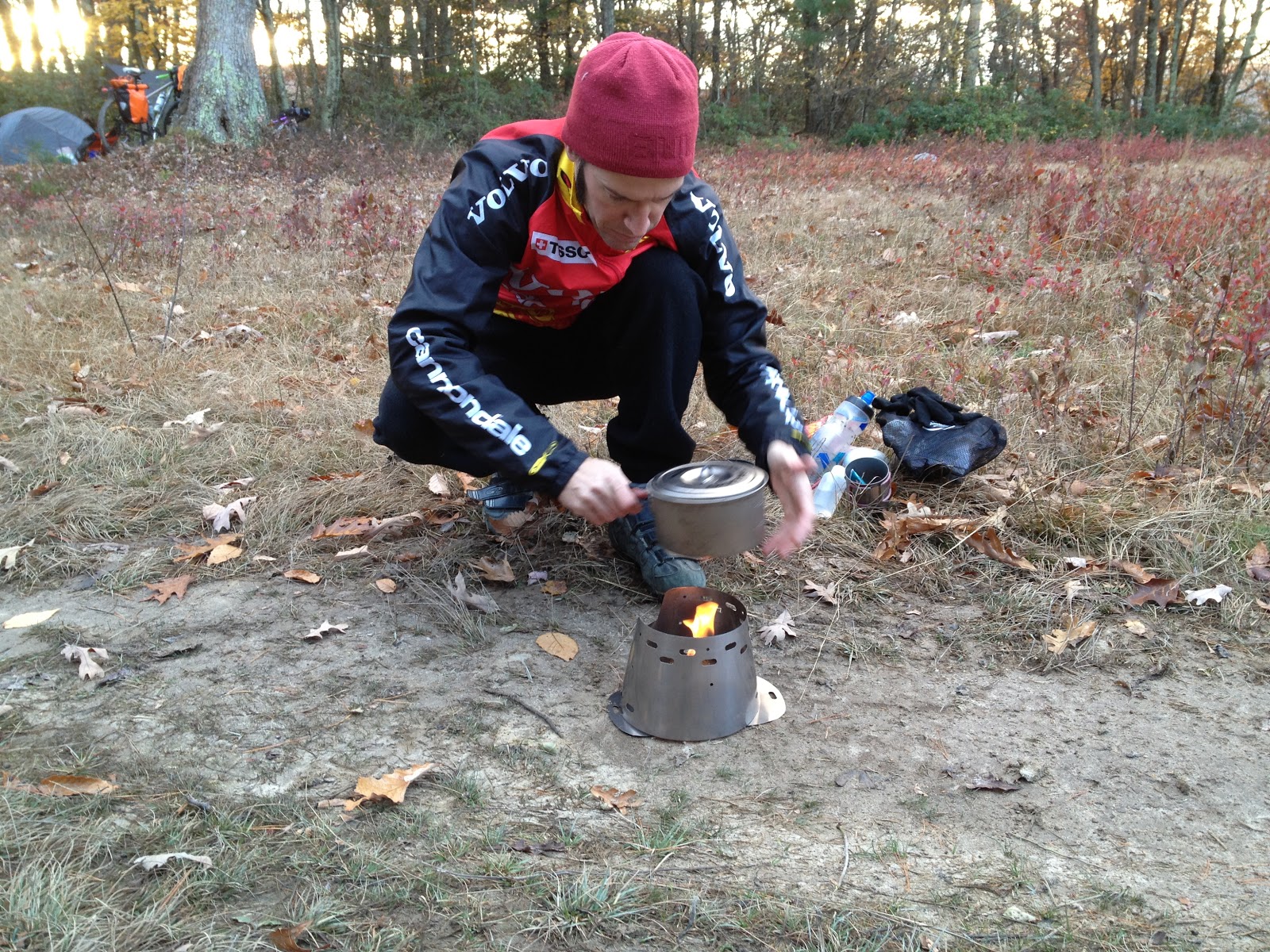 I’m pretty impressed at how well his alcohol stove works and how quickly it boils water.  We packed up camp and were rolling shortly after nine.  We retraced out steps off Rader Mountain and hung a left to head down to FR85-2 which runs along the West Virginia side of the Shenandoah Mountain back to Rt. 33.  We seriously took our time riding along FR85-2 as it was a beautiful morning and neither of us were in a rush to get back to the real world. 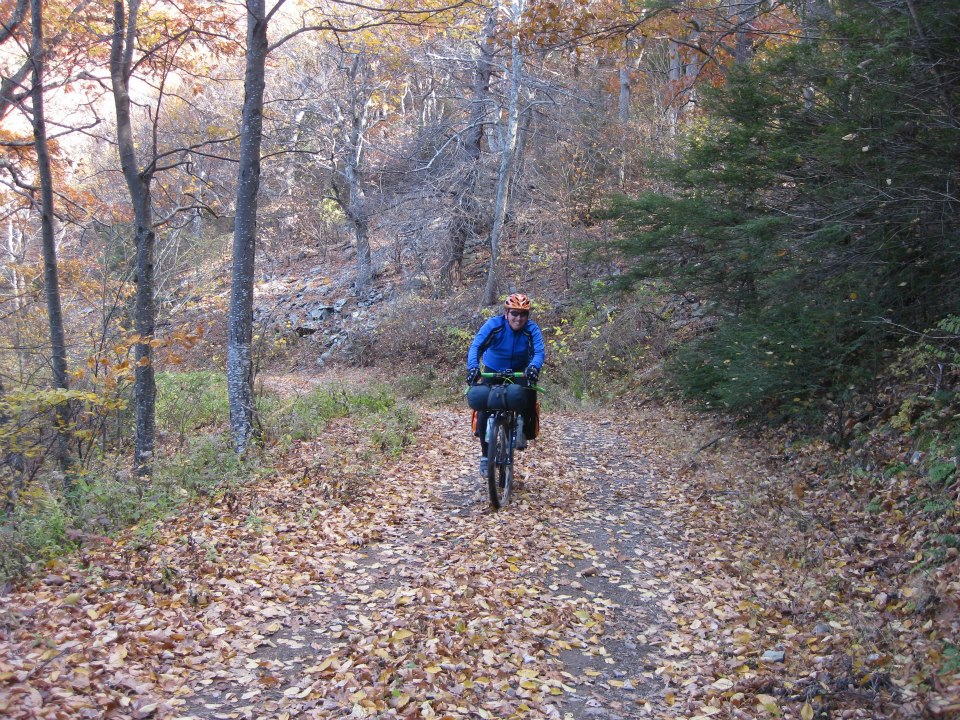 Once we got to Rt. 33 it was a 100 yard climb to the top then bombing down the pavement back to Bridgewater getting home by about 12:45.  It was another great trip and we’re already scheming about the next one, probably in the same area but maybe heading north instead of south when we get to the end of Long Run Road.  A couple folks have asked me about the pack setups on our bikes.  Here’s Johnny’s FatBack. 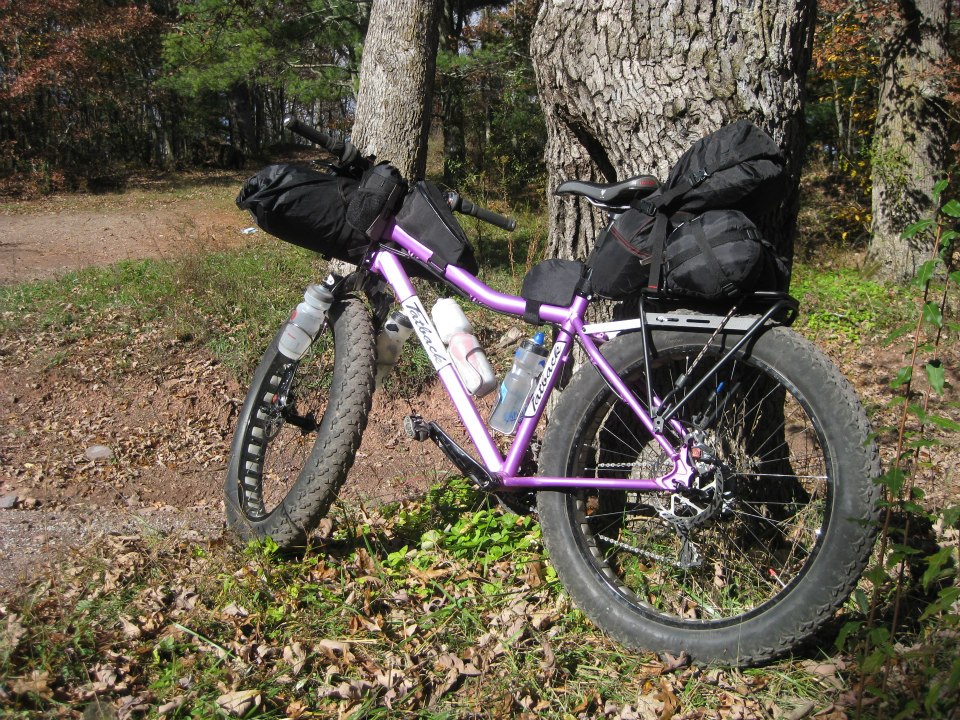 He’s using Revelate Designs handlebar/seat bags and a small rack on the back for his sleeping bag.  And here is my Salsa Fargo. 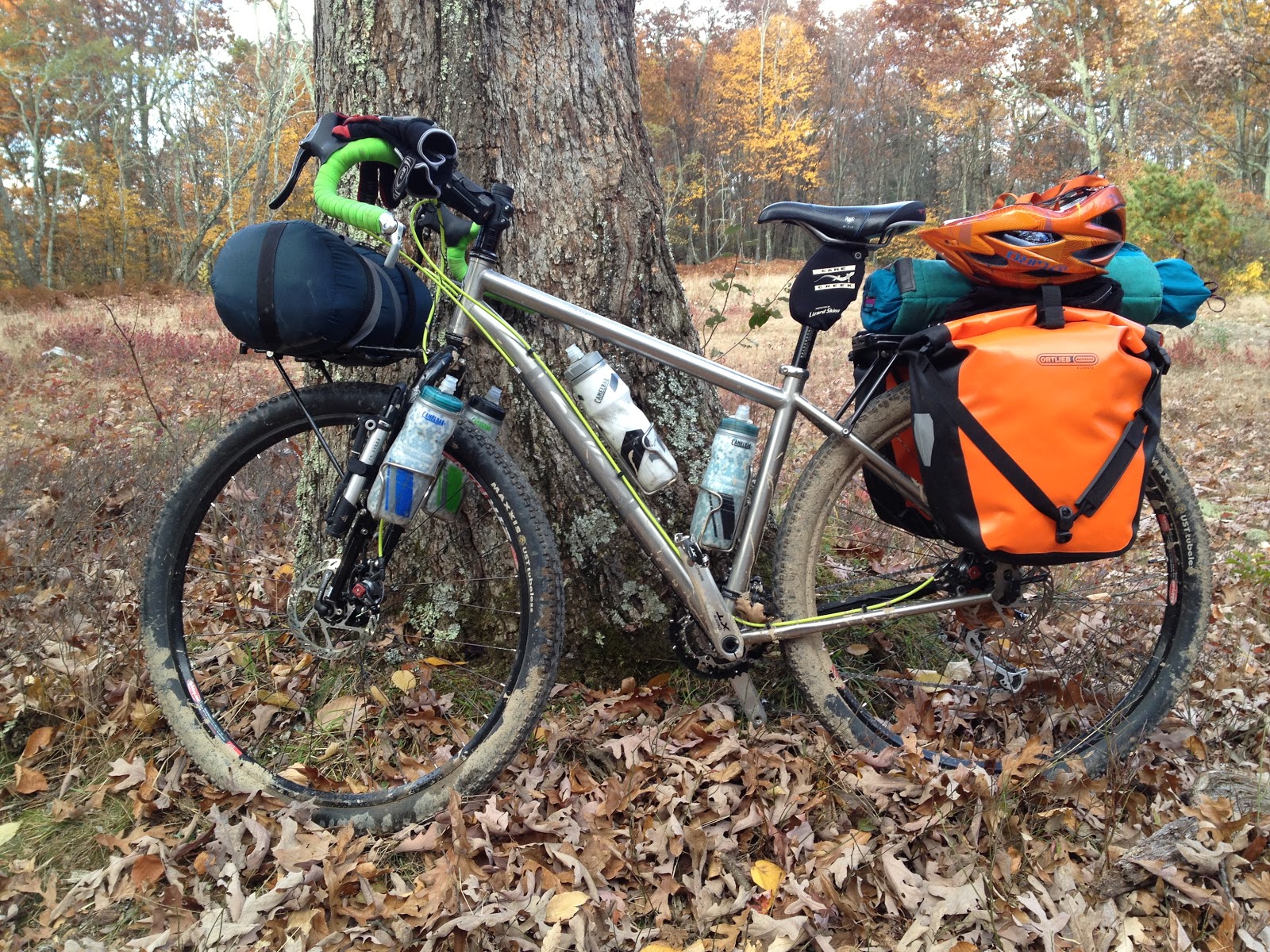 In this setup I’m using a Salsa Minimalist rack on the front for my sleeping bag, a Salsa Wanderlust rack on the back for my sleeping pad and a couple Ortlieb panniers for the rest of my stuff.  After this trip I have decided to not use the Ortlieb panniers for off road as they just rattle around too much and put too much weight too far back.  I’ve got a Revelate Designs frame bag and seat bag on the way so I can ditch the panniers.